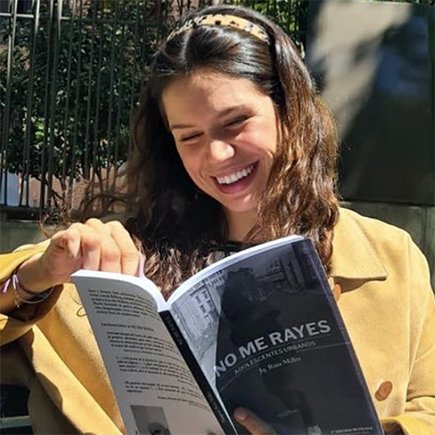 Don't scratch me in AMAZON

The situation became very violent. Pati had already threatened me at the end of the class, warning me that if I dared to do a part of them I was lost. Within a week everything had become complicated. They asked me, casually, out of human curiosity, how many children I had; Then they told me to go looking for another job, that I was going to be unemployed. They gave me a choice: to confess. What to confess? ... what.

Pull down! She told him.

We moved to the escalators, we took him between the two of us and sat with him to wait for the convoy to pass and the platform to be emptied. Then we get right behind the cameras:

He took it from her, we went back to the bank and gave him back what was in his pockets: a subway card, some papers, two thousand pelas and some gloves. And we stayed talking for a while.

-Do not say anything. But nothing to anyone!

Don't take it from me, please, it's from my sister.

If you want to go looking for her, go to San Roque, which is a very sketchy neighborhood.

We got on the next subway and left it lying there.

Hey, is this Ouija board okay? —A paper with a many-pointed star and numbers around it.

-Why do you want to know?

-Because my sister, the eleven-year-old -says Dicktease, or Lorena, at patio time- has been doing it for a month and I want to know if she is in danger with this board, because she seems very strange to me.

And I made him ours, not without warning him that all spiritism is bad.

The following week they summon me on Avenida Primavera street, which is further away than his fucking mother. More than three quarters of an hour walking. I am asking about the workshop school because I am not clear. I go straight in because it's eleven o'clock and it's time. I search among the pavilions: the Waiters Pavilion, another Construction Pavilion, until finally I find the Painters Pavilion. The Information lady sends me up. They are already doing the test. On the table there is a double-sheet folder where they ask you for your personal information, why do you want to do a workshop school, why that trade ... for that you have a quarter of an hour. And then the sheet that "kills the cat", the one for the psychotechnical test, which is a series of dominoes that eats your head a lot and you end up seeing tiles everywhere.

Through this Cookie configuration panel, the user may get to know the purposes of the cookies used, it also has the possibility of setting them to totally or partially accept or reject their use and also get additional information on the full information of their meaning, setting, purposes and rights... [read more]

This Website uses own and third party cookies, to provide a satisfactory browsing experience for the user, to perform metrics and statistics, as well as marketing actions. If the user disagrees with any one of the purposes, the user may customise the options from this policy... [read less]

The user, enables the use and installation of the cookies with these purposes:

Always enabled
These are own Cookies that have an exclusively technical purpose, that do not gather, nor disclose any personal data of the user without consent and they are not used to collect information, nor register the IP access addresses, no browsing behaviour. They are necessary and essential cookies and their purpose is to provide service to the website's user, aiming at making its use easier with a technical purpose, to enable the browsing through the website and the use of different options and services that are on it, for instance the proper management of the cookies.

They are Cookies that allow to customise the functions or contents of a website depending on the browser obtained data, for instance the language. Not using these cookies, will prevent from storing the preference data for future visits, this could make the website experience less functional or satisfactory, but will not affect its functioning.

Aiming at offering the best service to the user and to make the use of the website easier, the number of pages visited are analysed, the number of visits, as well as the visitors' activity and the frequency of use. To this avail the anonymous statistical information is drawn up, carried out to analyse the users' activity within the website, measure the traffic and web performance, obtain the statistical measuring and offer enhanced future performance.

They make contents available to the user as well as appropriate advertising on the website and the social platforms depending on their likes and browsing preferences, being able to create a profile on you and your interests, to show you customised content.

Likewise, this website may have links to third party websites, their privacy policies, cookie policies and legal texts, being not related to the holder of this website. When accessing these websites by the stated links, the user is free to accept or reject the mentioned sections.